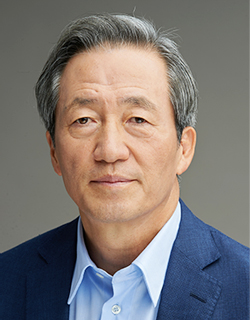 The late Asan Chung Ju-yung, founder and the first chairman of the ASAN Foundation, often said, "People are the basis for everything in this world. We face, however, two sources of distress: disease and poverty. They create a vicious cycle in which diseases makes one poor and being poor, one cannot seek out adequate treatments."

I believe the ASAN Foundation's most important task is to advance the health and well-being of our society by supporting critical medical research.

In this spirit, the Asan Medical Center, founded in 1989 by the ASAN Foundation, has developed into a globally recognized medical institution.  Staffed with Korea's best medical skills, it has emerged as a learning center for medical researchers from all around the world, including those from advanced countries.

Moreover, the ASAN Foundation created the Asan Award in Medicine to recognize and celebrate works by medical scientists who have contributed significantly to the advancement of medical science.

We are well aware of the prodigious efforts of medical researchers. We hope that the Asan Award can serve as a sign of our recognition of their research pursuits and serve as a source of inspiration for future research.

I would like to thank everyone who has championed the works of the ASAN Foundation and ask for your continued support.